U HE I - Here's something different

Here's something different.
In my book "Revealed At Last" I wrote a chapter called

"University of the Highest Education International."

It's a supernatural university where students learn through their experiences. They are the class. They are the subject. Everything is focused around the individuals encounters.

As with other universities, students can buy t-shirts and other merchandise, which is really cool. (I bought some of the university's t-shirts myself. It does start conversations.)

So wherever a person is in the world, they take part in their own supernatural education where they are at.
At first it was just a chapter in my book but then I made it into a reality and created the university website. U HE I.


http://uhei.co.uk
Posted by Peter Hutchinson at 15:07 No comments:

Email ThisBlogThis!Share to TwitterShare to FacebookShare to Pinterest
Labels: U HE I

Go through the door...

Step inside and read what Peter Hutchinson found out about life, God's kingdom, our existence, the future and love.

Revealed At Last by Peter Hutchinson

This is the book with the new cover. 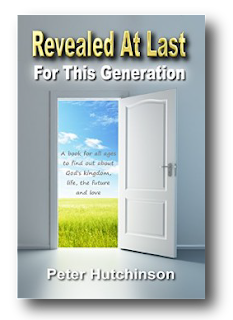 
The book with the original cover is still available. 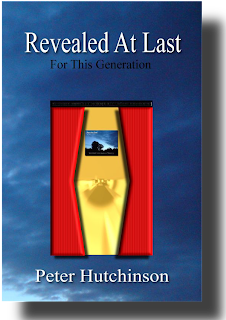 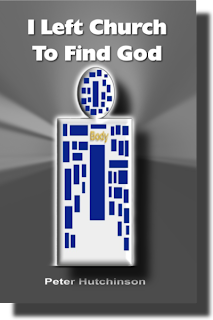 Posted by Peter Hutchinson at 15:52 No comments:

People Hate My Cover for "Revealed At Last" - Explanation


A number of people have expressed their opinion about the cover of my book “Revealed At Last.” As soon as they have seen it they say

“I don’t like that. If I saw that cover in a shop I wouldn't pick that up.”

Well that blows the saying “don’t judge a book by the cover” out the window.

The two red parts represent curtains. They are being pulled apart to reveal the golden city. The golden city what I am revealing is inside you.
The little picture at the top is called “Peace Has Come.” (see here)

When you put it all together, the red curtains are opening to reveal your golden kingdom that is inside you so that peace can come to you.

When I explained the cover, then people have said,

“That’s interesting. I’ll have to have a read of that.”

You can get your copy of Revealed At Last WITH THE NEW COVER at the link below.


You can still get the original cover at this link

Posted by Peter Hutchinson at 17:26 No comments: